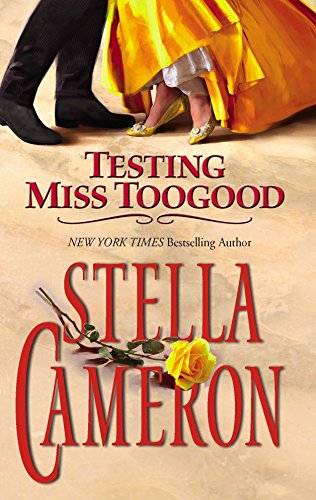 Despite a promising premise, bestseller Cameron's underdeveloped Regency romance, the sequel to , disappoints. At the novel's outset, the second eldest of Reverend Toogood's five daughters, Fleur, travels to London as a charge of the Dowager Elliot in order to make a brilliant match that will improve the family fortunes. Fleur, however, has no intention of marrying unless she can find a man who meets all of the stringent requirements she has documented in "The List" (e.g., "Will he join me in learning exotic ways of lovemaking?"). The dowager instructs her youngest son, Dominic, to squire Miss Toogood to London's social events, much to his dismay. The dashing Dominic has other things on his mind, namely apprehending a man known as the Silken Cat, who kidnaps high society ladies and holds them for ransom. But as soon as Dominic meets Fleur, he knows that resisting her will be a challenge, especially when the spirited girl proves herself adept at meddling in his top secret business. Attempting to be both a romantic comedy and a dark thriller, the novel succeeds as neither, primarily because the mystery is poorly constructed. Though the romantic element is more approachable initially, sex too often stands in as a resolution to Fleur and Dominic's many conflicts, making their romance ultimately unsatisfying.