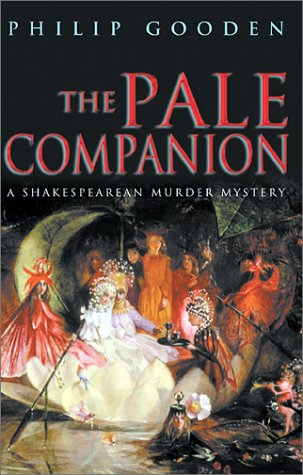 Welcome to Elizabethan England, where British author Gooden's pale companion will give you a gratifying taste of the danger and excitement of that lusty place and time. In midsummer of 1601, the Chamberlain's Men, a troupe of actors based in London at the Globe, are set to perform a play written by one of their members, young Will Shakespeare, for the marriage of Lord Elcombe's elder son. Nicholas Revill, in his third appearance as a minor actor and major sleuth with the Men (; ), soon realizes that this is turning into a nightmare. During a postprandial stroll through the woods, Nick first becomes aware that there's a "presence" dogging his footsteps. In one form or another this "pale companion" haunts the story, as in "the moon—pale companion to our revels" or the couple (one of whom is light, the other dark) that Nick observes in the garden the night before a body is discovered pinned to the sundial by its tapered brass gnomon. Wanting no more pale companions, Nick proceeds to solve the mysteries. Gooden admirably conveys the sense of period and place through accurate details of Elizabethan "business." Hangings were considered great sport, especially in London, where a "Tyburn turn-off" was as good as a party. And the wedding feast is a culinary treasure trove of goodies: conies, manchets, kissing-comfits and Spanish paps. Historical mystery fans are in for a treat.