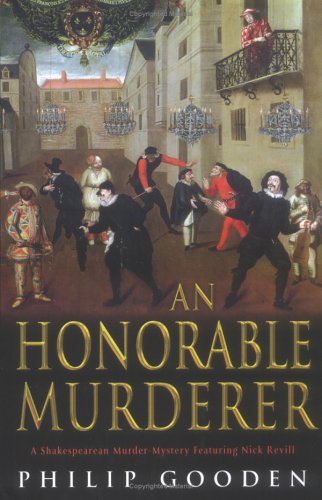 British author Gooden's sixth historical to feature actor and sometime sleuth Nick Revill (after 2004's ) takes the reader for an enjoyable, fast-paced romp through the world of Shakespeare and Ben Jonson. In 1604, Nick's troupe is helping to celebrate an impending peace treaty between England and Spain by performing a short play that includes such illustrious figures as Queen Anne and a courtier, Sir Philip Blake, among the cast. Portraying Truth, Blake is supposed to descend from the heavens at the drama's climax, but his drop proves more rapid than planned during a final rehearsal, resulting in his gory death. Investigating the apparent accident becomes Nick's responsibility through the forceful request of a shadowy figure who's been tailing him and who even intervened to save him from further injury during a street assault. As the less than satisfying Agatha Christie–like resolution suggests, Gooden ranks below such masters of the historical mystery as Steven Saylor and Bruce Alexander, but Shakespeare fans will be intrigued by Gooden's intriguing use of themes from both and .