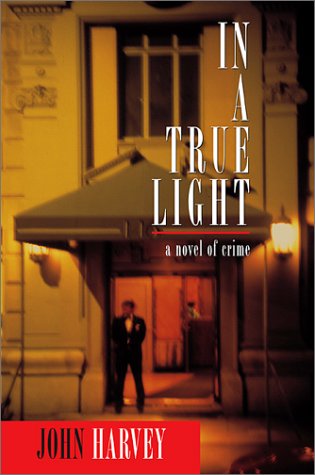 IN A TRUE LIGHT

British author Harvey ( and others in his Charlie Resnick detective series) offers the stuff noirs are made on in this stand-alone: mean streets and shattered dreams; heartfelt jazz and smoke-filled rooms; lonely people in sleazy bars; the harmless, and the harmful who prey on them; a world in which violence is mindless, brutal and inevitable. On his return home to London after serving two years in prison for art forgery, Sloane, a 60-year-old painter and all-around loser, is surprised to receive a letter from an old flame and far more successful artist, Jane Graham, who's dying of cancer in Italy and wants to see him. In Pisa, Sloane learns that he's the father of Jane's daughter, Connie, whom she hasn't seen in years. Sloane agrees to try to find Connie and soon tracks her to New York, where she's a nightclub singer. The problem is she "belongs" to her manager, mob-tainted Vincent Delaney, who has left a trail of maimed or murdered girlfriends behind him. Two NYPD detectives, Catherine Vargas and John Cherry, are doing their best to nail Delaney, a most formidable villain, for the murder of the last woman who told him good-bye. The reader really comes to care about the tragic and compelling Sloane, whose efforts to fill his unexpected father role lead him into all sorts of trouble. While the plot might have been stronger had Sloane acted without the help of Vargas and Cherry, this dark and dazzling tale of crime and redemption can only enhance Harvey's reputation.