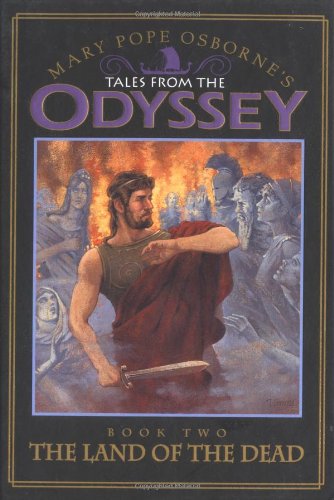 THE ONE-EYED GIANT; THE LAND OF THE DEAD

For graduates of , these installments of the Tales from the Odyssey series deftly distill episodes from Homer's epic. Osborne (the Magic Tree House series) opens the first volume as Odysseus receives King Agamemnon's orders to join the fight against Troy, and bring home the Greek queen, Helen, kidnapped by a Trojan prince. In succinct chapters, the author then traces the labyrinthine journey of Odysseus and his men as they attempt to sail home to Ithaca. She touches on their encounters with the island of the lotus-eaters, Polyphemus the Cyclops and Aeolus, god of the winds. The second book brings the hero and his band to the island of the cannibal giants who devour a number of Odysseus's men, the palace of Circe the enchantress, who transforms some of the Greeks into swine, and the Land of the Dead, where Odysseus encounters his mother's ghost. Plot takes precedence over character development, but the hero's bravery and fidelity come through in his actions. In brief chapters and concise sentences, Osborne pares down each of these adventures into easily absorbed, swiftly paced episodes that will keep readers anxiously anticipating book three, , scheduled for spring 2003. Each volume includes a glossary of gods and goddesses and a pronunciation guide to the characters' names, which also help recommend this series as a tidy introduction to Homer and to Greek mythology. Final artwork not seen by . Ages 8-11. (.)