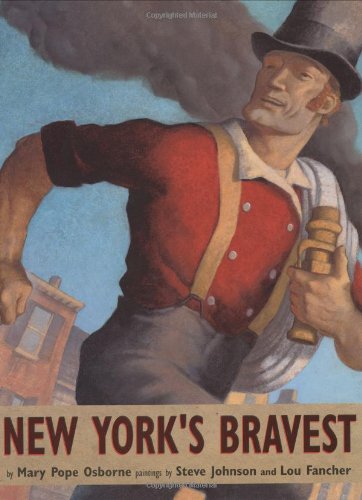 Past and present combine to stirring effect in this tall tale with real-world reverberations. Dedicated "To the memory of the 343 New York City firefighters who gave their lives to save others on September 11, 2001," Osborne's (the Magic Tree House series) story, set against 19th-century New York City, draws on the legend of real-life firefighter Mose Humphrey. In a subtle parallel to last fall's catastrophe, the author notes that eight-feet-tall Mose, with "hands as big as Virginia hams," runs toward danger as others run away. Johnson and Fancher () portray the man's powerful figure from street level, to emphasize his height and heft as he rushes to a burning building or lifts a horse-drawn trolley that bars the hero's way. After Mose courageously makes repeated trips into a burning hotel to rescue all of the guests, his co-workers realize that Mose is nowhere to be found. This vague sense of loss and lack of resolution will hit home for many youngsters; the artists evoke a solemn mood with ash-covered cobblestone streets and the long faces of fellow firefighters. But the words of an old-timer help them carry on their noble mission in the hero's memory: "Whenever we climb our ladders toward a blazing sky, he climbs with us." Author and artist carefully and respectfully balance the tall-tale ingredients with actual events to craft a loving tribute—one that may well help youngsters cope with the loss of these brave leaders. Ages 5-8.