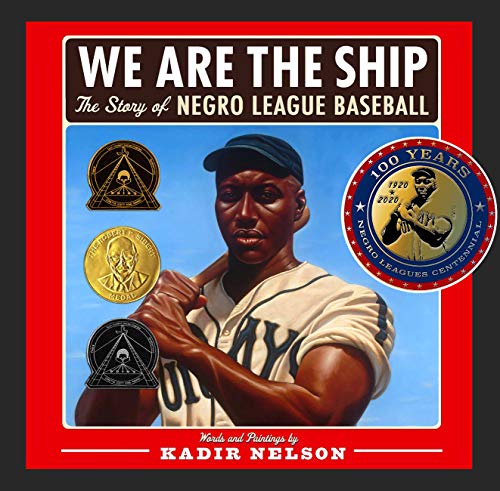 We Are the Ship: The Story of Negro League Baseball

In his first outing as author as well as illustrator, Nelson ( ) delivers a history of the Negro Leagues in a sumptuous volume that no baseball fan should be without. Using a folksy vernacular, a fictional player gives an insider account of segregated baseball, explaining the aggressive style of play (“Those fellows would bunt and run you to death. Drove pitchers crazy!”) and recalling favorite players. Of Satchel Paige, he says, “Even his slow stuff was fast.” As illuminating as the text is, Nelson’s muscular paintings serve as the true draw. His larger-than-life players have oversized hands, elongated bodies and near-impossible athleticism. Their lined faces suggest the seriousness with which they took their sport and the circumstances under which they were made to play it. A gatefold depicting the first “Colored World Series” is particularly exquisite—a replica ticket opens from the gutter to reveal the entire line-ups of both teams. And while this large, square book (just a shade smaller than a regulation-size base) succeeds as coffee-table art, it soars as a tribute to the individuals, like the legendary Josh Gibson, who was ultimately elected to the National Baseball Hall of Fame without ever playing in the major leagues. As Nelson’s narrator says, “We had many Josh Gibsons in the Negro Leagues.... But you never heard about them. It’s a shame the world didn’t get to see them play.” Ages 8-up.