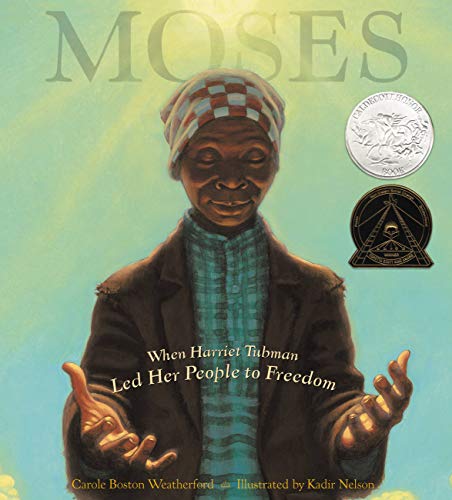 Moses: When Harriet Tubman Led Her People to Freedom

In this gorgeous, poetic picture book, Weatherford ( ) depicts Harriet Tubman's initial escape from slavery and her mission to lead others to freedom as divinely inspired, and achieved by steadfast faith and prayer. The author frames the text as an ongoing dialogue between Tubman and God, inserting narration to move the action along. On the eve of her being sold and torn from her family, Tubman prays in her despair. In response, "God speaks in a whip-poor-will's song. 'I set the North Star in the heavens and I mean for you to be free.' " The twinkling star encourages Tubman: "My mind is made up. Tomorrow, I flee." The book's elegant design clearly delineates these elements—Harriet's words in italic, God's calming words in all caps drifting across the pages, the narrator's words in roman typeface—and makes this read like a wholly engrossing dramatic play. Nelson's ( ) finely rendered oil and watercolor paintings, many set in the rural inky darkness of night, give his protagonist a vibrant, larger-than-life presence, befitting a woman who became known as the Moses of her people. His rugged backdrops and intense portraits convey all the emotion of Tubman's monumental mission. A foreword introduces the concept of slavery for children and an author's note includes a brief biography of Tubman. Ages 5-8.