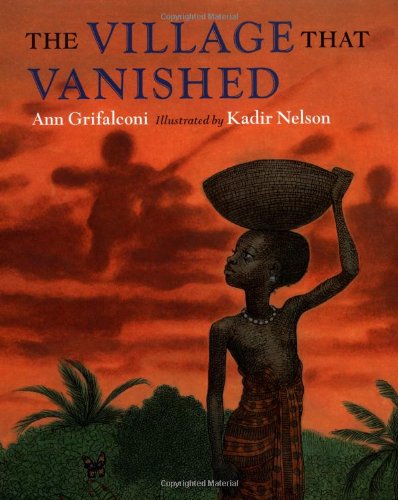 THE VILLAGE THAT VANISHED

The creator of sets another moving tale on African soil, this time recounting how a small village escapes a band of slave traders. Young Abikanile and her mother, Njemile, guide their fellow villagers in an ingenious escape, but it requires both courage and faith. In the style of an African storyteller, Grifalconi uses expressive prose to eloquently recount the anxious and poignant atmosphere as villagers prepare to flee deep into the forest to wait out the slavers. First, they must wipe out all traces of the village of Yao (except for the elder, Chimwala, who elects to stay and pose as a soothsayer): "The people stood back, then, leaning on their hoes, their tears wetting the soil where their homes had rested, as the smell of freshly turned earth rose about them." Nelson's () oils, heavy on dusky tones, fill in finely detailed pencil drawings to convey the dense flora of the African jungle as well as the gait, poise and feelings of the villagers. Crosshatched shadings add subtle texture to their dark skin, while a small white flower or brightly colored batik provides sophisticated contrast. In an especially effective scene, Njemile tells her daughter of the slavers who "come riding in swiftly on horseback, shooting their long guns, capturing unarmed farmers" while shadowy images of them, guns raised at the ready, eerily appear as dark clouds against an orange sky. An uplifting tale of inner strength and courage. Ages 5-up.