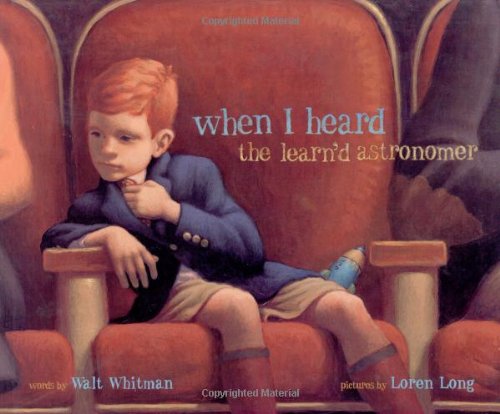 WHEN I HEARD THE LEARN'D ASTRONOMER

The illustrations in Long's latest effort call to mind his work in ; both have an ethereal quality that pulls readers utterly into the story's world. Shadowy and soft-edged, in moody autumn colors, the images are paired here with a short verse from Walt Whitman's , itself a resonant exploration of inner life. Long casts a redheaded boy in the role of narrator, and conveys his obsession with the galaxy through the boy's bedroom with its star-studded bedspread, lampshade and hand-chalked artwork. A wordless spread depicts his entry into a formidable building with his parents, where he attends a lecture by a "learn'd astronomer." Full-bleed paintings reveal the boy's curiosity as he explores his surroundings, but once the speaker begins, the child slumps in his seat: "How soon, unaccountable, I became tired and sick." He slips outdoors "in the mystical moist night-air," which gradually revives him. Long signals the boy's growing awareness of the celestial vastness by progressing from tight, intimate images (the boy contemplating a globe) to large-scale panoramas (the boy gazing upward in awestruck reverie, the stars—literally—reflected in his eyes). Children's doodles (math notations, scribbled stars) scattered throughout, add a playful note and also underscore the boy's fascination with the skies. The book's almost reverential pacing matches the rhythm of Whitman's poem and, in effect, forces young readers to slow down and savor the words. Long creates both an inviting introduction to poetry for children and an inspired paean to their dreams. All ages.