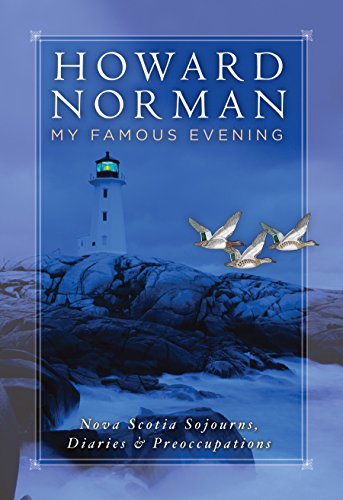 Norman shares his decades-long love affair with Nova Scotia in this latest addition to the National Geographic Directions series. Having traveled to the island in 1979 for work on a documentary film script, the author of and returns over the years, collecting myths and memories. In the book's first section, Norman relives the wanderlust of a young village woman, Marlais Quire, through the 1923 letters she writes to her sister. Enraptured with Joseph Conrad's work, Quire follows the writer to New York against her husband's wishes and her own better judgment. Quire never meets Conrad, but the struggle with her controlling husband and her literary passions lends insight to Nova Scotian smalltown life in the early 20th century. Later, Norman shares a number of stories about forerunners, eerie omens of tragedy well known to seafaring communities: "Forerunners, it seems to me, are examples of belief naturally infused with melancholy." Norman's love of bird-watching leads him to another folktale, concerning a mythic creature who protects locals from a troublesome bird that stirs up dangerous weather for oceangoers. Through his aviary interest, Norman also forges a friendship with Sandra Barry, a fellow bird-watcher and expert on the life of poet Elizabeth Bishop, who, as a child, was sent to live with her grandparents in Nova Scotia. The two retrace Bishop's steps: "I had wanted to sit all night in the kitchen of Elizabeth Bishop's house, candles lit, conversation between [my wife] and Sandra a kind of séance, bringing Miss Bishop into the present." Norman's collection is an out-of-the-ordinary pastiche of personal recollections and historical sketches. Map not seen by .