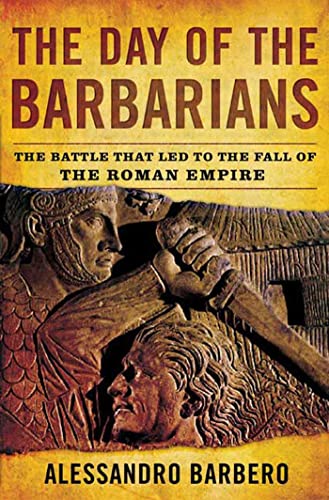 The Day of the Barbarians: The Battle That Led to the Fall of the Roman Empire

Medievalist Barbero ( ) offers a revisionist history of the relatively obscure battle of Adrianople, arguing that the course of world history changed after the clash in 378, in the eastern Roman province of Thrace, between an army of Goths and a Roman imperial army. The battle resulted in an overwhelming barbarian victory—the eastern emperor Valens died along with two-thirds of his army—setting in motion a train of events that led directly to "the fall of the western Roman Empire," according to Barbero. Rejecting the traditional view that Rome's decline was well underway by the fourth century, Barbero claims that by the eve of the battle of Adrianople, the empire's earlier problems "seemed to be... under control." To reconstitute the imperial army after the devastating losses at Adrianople, the Romans had to turn to the Goths, whose loyalty depended on how well they were paid. Eventually, the barbarians—despite their questionable loyalty—became "indispensable" for the defense and administration of the empire. When their interest and Rome's diverged, the western empire's fate was sealed. While Barbero's thesis is sure to spark debate among scholars and students, his sprightly prose makes this slim volume accessible to a general audience.