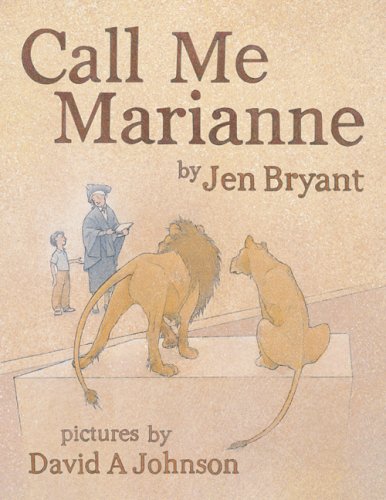 Bryant ( ) introduces Marianne Moore, the mid-20th-century poet, via her encounter with Jonathan, a New York city boy, who rescues the woman's trademark tri-cornered hat on the way to a lizard exhibit at the zoo. Johnson's ( ) watercolor compositions underscore narrator Jonathan's perceptions of both Moore and the animals he sees. Having exchanged names, the two look at the lizards; Moore scribbles notes, and the boy asks about her occupation: "What, exactly, does a poet do?" For Moore's answer, Johnson zooms in on the poet's face, framed by her extraordinary hat. Strands of silvery hair fly about her ears, and her lined features are set in thought. "For me," she says, "being a poet begins/ with watching." She describes her methods and shows him drafts of poems in her notebook. "Does it take a long time?" he asks. "This one took me nearly a year!" she says, then shows him another. "But this one took me only a few hours./ Every poem is different—just like those lizards." In thanks for her hat, Moore gives the boy a notebook and whispers, "You could write poetry." Bryant conveys a glimpse of the creative process in language young readers can grasp. Johnson's artwork, a little like the poetry of Moore herself, is formal, muted in color yet always lively; his watercolors capture the animals as capably as the human interactions. Ages 6-up.