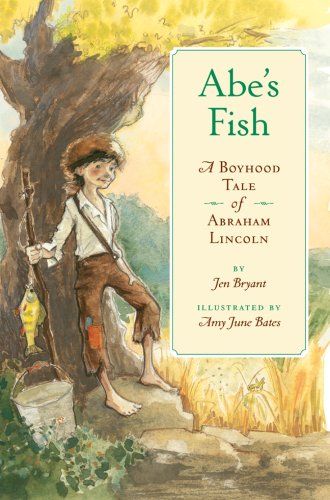 President Lincoln was once asked what he remembered about the War of 1812 and answered that what he recalled was having fished all day, catching a small fish and then giving it away to a hungry soldier returning home from the war. From this small anecdote, Bryant ( ) paints a picture of a boy who, while interested in playing pranks on his older sister, spends time considering the meaning of freedom and teaching himself to spell; he's a little too good to be likable. Bates ( ) humanizes Abe somewhat, giving him the occasionally puckish expression and letting him look petulant when dealing with his sister. The unusually tall format emphasizes Abe's stature, the moral dimension of which comes across clearly. Back-matter includes information on Lincoln's childhood, frontier childhood in general and the Lincoln presidency. Ages 4–up.