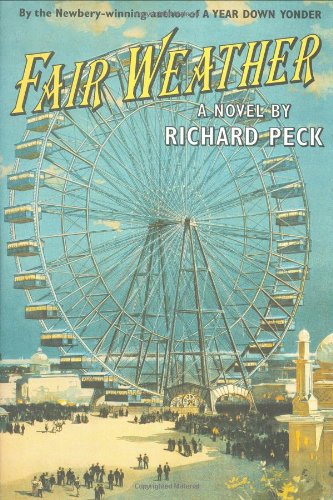 After spinning two yarns about city kids having madcap adventures in the country (; ), Peck plays the flip side here, hilariously relating what happens when three farm children take on the 1893 Chicago World's Fair. The narrator, 13-year-old Rosie Beckett, isn't quite sure what inspired her mother to allow Rosie and her two siblings to visit rich Aunt Euterpe in a "place with a million or so people, most of them criminals," but she suspects it has something to do with her wanting to separate Rosie's older sister, Lottie, from her suitor, "a drifter and probably a grifter." In any case, Lottie, Rosie and their younger brother, Buster, accompanied by their flamboyant grandfather, nearly burst with excitement as they embark on the biggest adventure of their lives. Peck fluidly works in the children's sense of awe as they observe the skyscrapers and the smooth surface of city roads. Meanwhile, the Becketts' boisterous spirits prove to be a little overwhelming for their widowed aunt (who still dresses in black after being a widow for four years). During the first 48 hours in Chicago, the Beckett clan manages to run off the household help and embarrass their aunt in front of some of Chicago's most prominent ladies. Luckily, things take a turn for the better, and later experiences—riding a Ferris wheel, seeing Buffalo Bill's Wild West Show and discovering Granddad Fuller is old pals with Buffalo Bill himself—are as thrilling for Aunt Euterpe as for her less sophisticated kin. Peck's unforgettable characters, cunning dialogue and fast-paced action will keep readers of all ages in stitches as he captures a colorful chapter in American history. Ages 10-up.