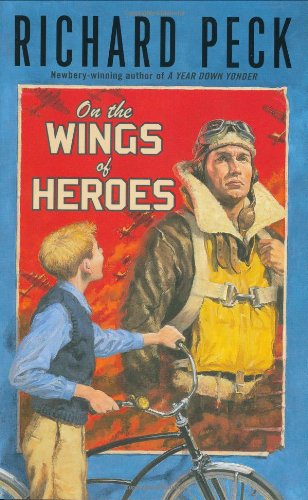 On the Wings of Heroes

Peck ( ) concocts another delicious mixture of humor, warmth and local color in this period piece, which describes America during WWII through the eyes of a Midwestern boy, Davy Bowman. The 1940s are a time of sacrifice for the Bowman family and a time of collecting for young Davy, who does his patriotic duty by gathering "whatever it took to win the war." Davy's search for scrap metal ("Five thousand tin cans will make a shell casing," his friend muses") leads him to mysterious Mr. Stonecypher, who lives in the oldest house in the neighborhood and who lost a son in another war. While hunting for milkweed ("for stuffing in life jackets, to keep shipwrecked sailors afloat"), Davy has his first run-in with old Miss Titus, a cantankerous woman, who ends up taking charge of his class during the teacher shortage ("We weren't used to a teacher who looked like a walnut with a mustache"). Throughout the novel, the author adroitly conveys how Davy's boundaries and horizons gradually expand, first beyond his neighborhood and finally overseas, when his brother is sent to Europe. First-person narrative brings the time period to life and vividly captures Davy's sentiments about the war and his family members, especially his father and brother, who are both heroes in Davy's mind. Chock full of eccentric characters and poignant moments, this coming-of-age novel will be embraced by children and grownups alike. Ages 10-up.