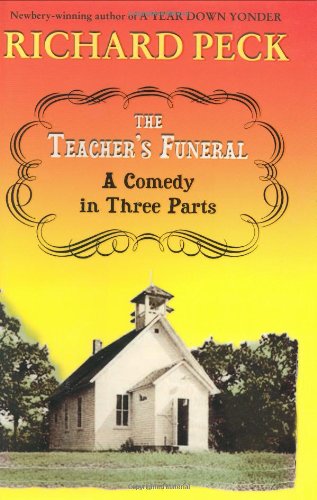 THE TEACHER'S FUNERAL: A Comedy in Three Parts

"If your teacher has to die, August isn't a bad time of year for it," begins Peck's ( ) latest rural comedy, set in the "backwoodsiest corner of Indiana." Just before school starts in 1904, a "miracle" occurs for 15-year-old Russell Culver and his classmates at Hominy Ridge School: Miss Myrt Arbuckle, the schoolmarm ("she must have been forty... [and] past her prime"), suddenly drops dead. Russell has high hopes that the school board will close the one-room schoolhouse. But as luck would have it, his high-school–age sister, Tansy, is hired to take Miss Myrt's place. What follows is a series of hilarious episodes, colorfully narrated by Russell, which recount Tansy's trials and tribulations attempting to educate a motley crew of pupils and maintain some order. Tansy and her students survive a privy fire, an explosion inside the school, a run-in with a snake and threats from neighboring "Aunt" Fannie Hamline, who accuses the students of "trespassin' and stealin'." Events on their own are enough to keep readers in stitches, but Russell's pithy descriptions of characters ("[Miss Myrt] had a snout on her long enough to drink water down a crawdad hole") add another dimension of humor. Following the tradition of Mark Twain, Peck gently pokes fun at social manners and captures local color while providing first-rate entertainment. Ages 10-up.