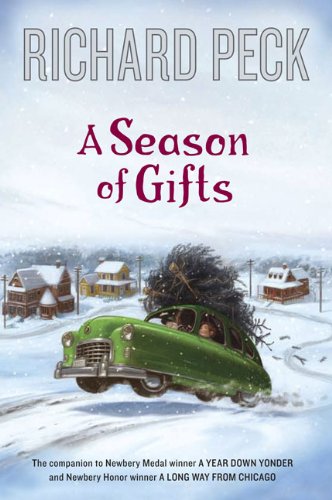 A Season of Gifts

The type of down-home humor and vibrant characterizations Peck fans have come to adore re-emerge in full as Peck resurrects Mrs. Dowdel, the irrepressible, self-sufficient grandmother featured in and . Set in 1958, his new novel is told from the point of view of 12-year-old Bob Barnhart, Mrs. Dowdel's new neighbor, who is distraught about having to move from Terre Haute to a “podunk” town, where his Methodist minister father has been called to shepherd a meager sprinkling of parishioners. Mrs. Dowdel is a source of entertainment, and some fear, for Bob and his sisters (“she could be amazingly light on her big pins. We'd already seen her take a broom and swat a Fuller Brush man off her porch”). But more important, she proves useful in outsmarting bullies and attracting new members to Mr. Barnhart's fold. Not all of Grandma Dowdel's gifts to the Barnharts (and in some cases the entire community) are as tangible as the windows she donates to the church, but her actions exude as much warmth and wisdom as they do hilarity. Ages 10–up.