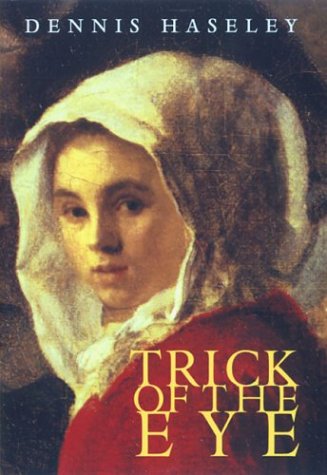 TRICK OF THE EYE

Elliptical in its storytelling and circuitous in its structure, Haseley's ( ) mannered novel will likely intrigue some readers with its notions about art as illusion, but may leave others confused or even bored. Richard, referred to as "the boy," seems to be entering the painting that hangs in his house and talking with the figures within. Educated at home, by a tutor (the story is set in an indeterminate past), Richard has been expelled from school because of his violent response to a suddenly surfacing memory of a trauma from early childhood. Now the figures in the paintings seem to be giving Richard clues about another mystery in his past, which may or may not be connected to thefts from a nearby art gallery. A long sequence has Richard at a museum, entering masterpieces à la James Mayhew's Katie books and talking to the subjects. But is "the boy" actually wandering into the paintings and solving a mystery, or is he losing his mind? The author writes in impressionistic, attenuated prose with figures piping up in strange voices ("He said cooo cooo cooo. He said la, she said la la laaaaa"). The cloud of ambiguity does not lift until the last few pages, when one of the characters spells out the tragedies that Richard has witnessed and hidden even from himself. Unfortunately, readers may not care enough about Richard to puzzle out the mystifications. Ages 12-up.