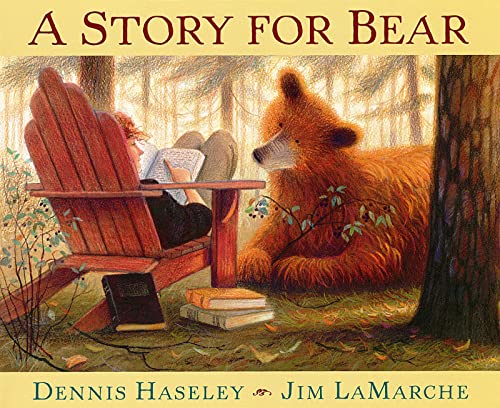 A STORY FOR BEAR

In Haseley's () wistful tale of a bear beguiled by a woman he befriends one summer, inconsistencies render the events more puzzling than haunting. The narrative begins from the bear's point of view, as he first discovers "something lying on the ground," which readers can see is a letter. On the next spread, the narrative voice shifts: "Through the years, the bear looked at the paper with wonder—it seemed as far away and mysterious as the moon." Next, the text switches to the main action: the bear observes a woman outside her cabin, carrying something he can describe only as "a mysterious square thing." However, in the next sentence he identifies it: "He [tried] to understand what she was doing as she held the book." The tug-of-war in point of view continues as the woman begins to read aloud to the bear. At the end of her stay, she leaves her books for him (even though he cannot read), and he takes them back to his cave, where they provide him with comfort all winter. LaMarche's () shimmering pastel spreads go far to carry the tale over its rough spots. The artwork conveys the bear and the woman in growing intimacy, their heads drawing closer together over the shared books. Nature scenes chronicle the passing of the summer; in the sky behind them, geese fly south, hinting at her departure. Yet LaMarche alone cannot clarify the narrative. Some children may find the magic in this peaceable kingdom, but more will be left outside, wondering what to make of it. Ages 5-8.