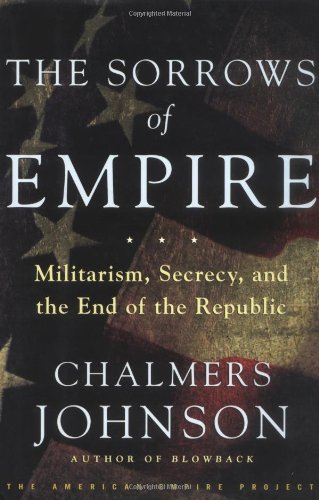 THE SORROWS OF EMPIRE: Militarism, Secrecy, and the End of the Republic

In his prescient 2000 bestseller, East Asia scholar Johnson predicted dire consequences for a U.S. foreign policy that had run roughshod over Asia. Now he joins a chorus of Bush critics in this provocative, detailed tour of what he sees as America's entrenched culture of militarism, its "private army" of special forces and its worldwide archipelago of military "colonies." According to Johnson, before a mute public and Congress, oil and arms barons have displaced the State Department, secretly creating "a military juggernaut intent on world domination" and are exercising "preemptive intervention" for "oil, Israel, and... to fulfill our self-perceived destiny as a New Rome." Johnson admits that Bill Clinton, who disguised his policies as globalization, was a "much more effective imperialist," but most of the book assails "the boy emperor" Bush and his cronies with one of the most startling and engrossing accounts of exotic defense capabilities, operations and spending in print, though these assertions are not new and not always assiduously sourced. Fans of will be pleased despite Johnson's lack of remedies other than "a revolution" in which "the people could retake control of Congress... and cut off the supply of money to the Pentagon."