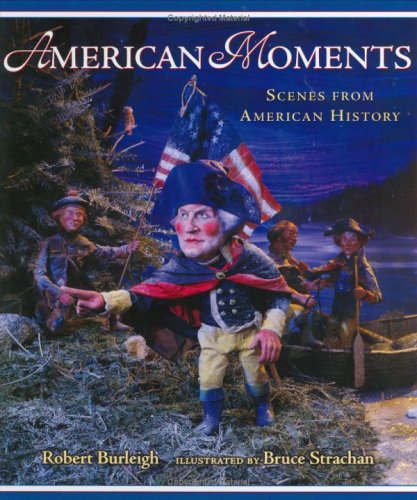 Startling 3-D tableaux steal the show in this historical parade, which reenacts 18 moments in this country's past, from the first Thanksgiving in 1621 to a candlelight vigil at Ground Zero in October 2001. Written in present tense, Burleigh's ( ) page-long entries re-create each incident succinctly and dramatically, incorporating imagined dialogue and thoughts. Guiding runaway slaves along the Underground Railroad, Harriet Tubman addresses an understandably frightened man who wishes to turn back: "You've got just two choices now: to come with us—or die." Then she reassures her group and motivates them: "So, all together, everyone. Let's up and get gone." Burleigh includes events that changed the course of history as well as celebrations of American creativity and culture (Houdini escapes from a straitjacket while hanging upside-down high above a street; Georgia O'Keeffe sets up her easel in the New Mexico desert). Endnotes expand on these narratives, which, however gripping, are to some extent overshadowed by Strachan's dioramas. These feature vibrantly painted figures sculpted from clay alongside props and scenery, with painted wooden backdrops to enhance the setting. The proportions in the illustrations vary. Sometimes the figures have the outsize heads favored by political cartoonists, which can be off-putting (the image of Orville Wright flying his plane looks almost like Jay Jay the Jet Plane). The most stirring images are the most realistically rendered; the view of the bus where Rosa Parks claims her seat, surrounded by baffled passengers, inspires a rush of feelings. Ages 6-10.