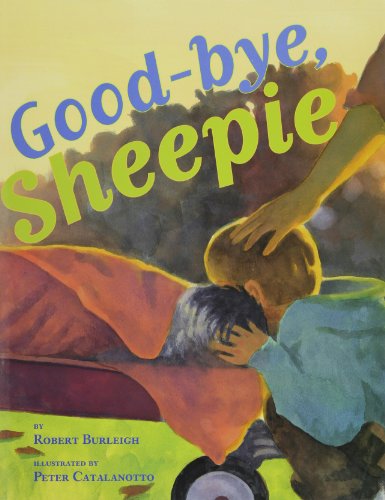 A story about the death of a dog can't be anything but heartrending, and Burleigh ( ) looks at grief without blinking. “Owen's best friend was his dog, Sheepie,” he starts, preparing readers for Sheepie's death right away by describing how much the dog has slowed down. But it's still a shock when Owen finds Sheepie lying unmoving under a tree. Despite his father's well-chosen words—“Poor Sheepie. He was hurting. We knew he couldn't live forever”—readers' hearts will sink along with Owen's as the boy watches his father dig a hole. Catalanotto's ( ) watercolor and gouache paintings watch the action from reassuring angles: from behind Owen as he discovers Sheepie's body, and over Owen's father's shoulder as he tells Owen, “...he'll stay with us, in a way. He'll become part of our happy memories.” Burleigh unspools the story at just the right speed, and Owen's father offers love, support, and a vision of death as not quite a final end. Those who have lost a beloved pet will know how Owen feels, and many may cry with him. Ages 3–7.