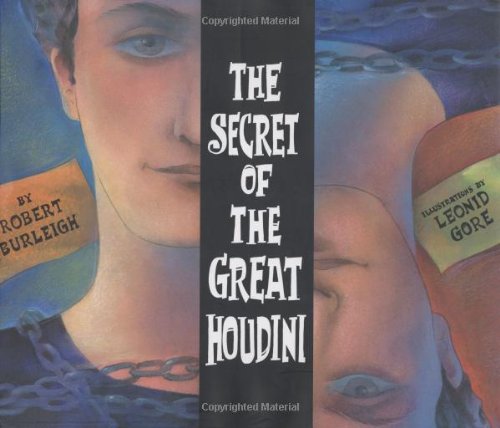 THE SECRET OF THE GREAT HOUDINI

This child's-eye view of the legendary escape artist finds young Sam and his uncle joining a crowd at the end of a pier, eager to watch Houdini work his magic. Handcuffed, chained and locked into a metal trunk ("The crowd is so still that even from far off the lock's tiny click can be heard as it snaps shut"), Houdini is dropped into the sea as the onlookers gasp. As the seconds tick by—one minute, two minutes—the tension grows almost unbearable for the audience, especially Sam. "He is down there himself now: Sam, inside the airlessness with horrible thrashing, the cold, inky water seeping through the cracks, and a vise crushing his lungs, squeezing the seconds out." Burleigh's () prose is frequently resonant ("Darkness and cold are in the bones of the Great Houdini"), but loses steam when it drifts into a somewhat primly delivered message about following one's dreams ("Maybe you shouldn't wonder so much about secret…. What's really important is finding secret—something that becomes like a seed inside you—that will grow as you grow up"). Gore's () pastel and ink illustrations strike a misty note, with the chilly blues of the water contrasting handsomely with Houdini himself who, bathed in a pale light, appears enigmatic, even otherworldly. An afterword outlines Houdini's life and career; readers will be intrigued to learn that some of his tricks continue to elude explanation. Ages 7-10.