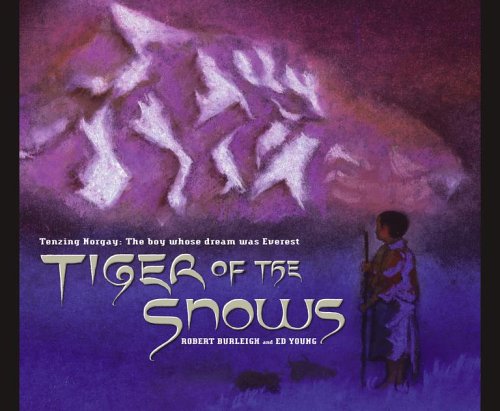 Tiger of the Snows: Tenzing Norgay: The Boy Whose Dream Was Everest

This extraordinary book tells a long-neglected story about a Himalayan sherpa who fulfills his childhood dreams of climbing to "the top of the world." Although Sir Edmund Hillary is given credit for being the first man to climb Mount Everest on May 20, 1953, he was actually led to the summit by Tenzing Norgay, whose life story is effectively told in this formal poem. Young's ( ) cinematic illustrations are nearly as awe-inspiring as the mountain itself, and Burleigh's ( evocative poetry is both challenging and lyrical. As a boy, Tenzing is "hungry for the taste of clouds," and dreams of climbing the five-mile high mountain, the "sharpest tooth in the jaw of the great dragon,/ Mountain so tall no bird can fly over it." In Young's breathtaking illustrations, the mountains become characters in the book; his pastels take on the texture of colorful shadows, "wind-sculpted snow" and a landscape of clouds. He drapes the white, snow-capped mountains in robes of indigo, cobalt and cerulean, and the swirling snow seems to move on the page. Were it not for the explanation of Norgay's story in the afterword and on the book's jacket, young readers might have difficulty puzzling out the tale's complicated syntax, but Young's illustrations provide a strong context for Burleigh's "Song for Tenzing,/ Tenzing Norgay,/ Sherpa,/ Mountain man,/ Tiger of the snows." Together, text and illustrations create a unified work of art as dazzling as sunlit snow. Ages 7-10.