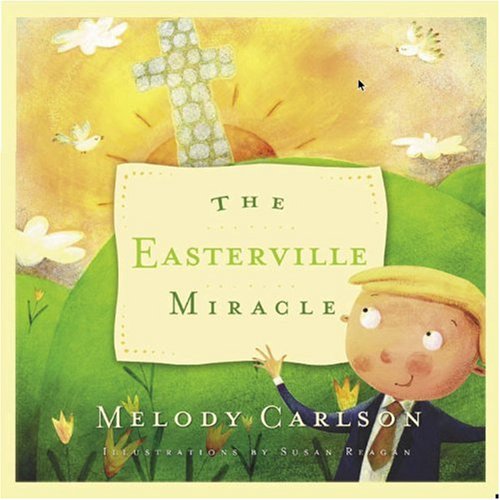 What's the reason for the Easter season? The residents of Easterville—preoccupied with all the commercial elements of the holiday—don't know, until a boy named Sam investigates. When the annual hustle and bustle of spring hits Easterville, the whole town is busy buying new clothes, decorating with colored eggs and chomping on chick-shaped chocolates. But Sam itches to know what's behind all the fuss, so he consults Henry, the old man on the hill. Henry shares with Sam the story of how Jesus "gave his life for everyone" and then rose from the dead. Sam's zeal for sharing his new knowledge drives him to help Henry with a mysterious project—a symbol that is revealed to Easterville on Easter Sunday. Carlson's rhyming text gets the seasonal images and the message right, though some lines scan better than others. Her light tone proves effective without being overly emphatic. Reagan's (teamed with Carlson for the Just Like Jesus Said series) flat but sunny artwork conveys the comic aspects of a town lost in the trappings of a holiday. Her round-headed, rosy-cheeked characters come across as a happy, friendly crew. Ages 4-10.