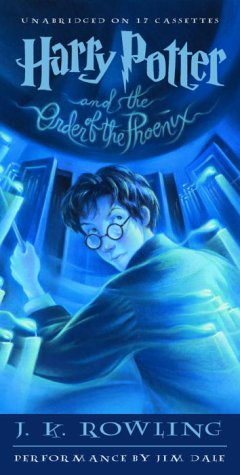 Dale again takes the reins as nimble voice master and gallops away with a splendid performance of Rowling's fifth tome about the beloved boy wizard. Full credit is due Dale for creating—and keeping track of—an enormous cast (134, to be precise) of distinct voices; he achieves impressive continuity of character from one novel to the next. But perhaps most notable here is Dale's development of protagonist Harry's evolution from wide-eyed, affable boy to an often angry and disillusioned teenager. Obviously at home in Rowling's world, Dale effortlessly follows the story into darker and more complex waters. Plot turns include further intrigue amongst the wizard hierarchy, the arrival of a new, suspect Defense of the Dark Arts professor, and the main characters' navigation through increasing social and academic pressures. Though Harry, Ron and Hermione are gradually sounding a bit older, and inevitably wiser, Dale keeps their cores intact, so as not to lose listeners along the way. Ages 9-up.