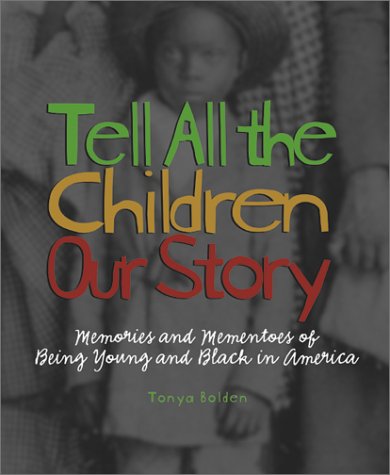 TELL ALL THE CHILDREN OUR STORY: Memories and Mementos of Being Young and Black in America

In what her preface describes as "this scrapbook, this witness of the black experience in miniature," Bolden () presents a pastiche of visuals and narratives spotlighting American children of African descent, from colonial times to the present. An abundance of period photographs, paintings, drawings and handsomely set-off extracts from memoirs, letters and journals create the appearance of a scrapbook or album; more importantly, they allow readers to immerse themselves directly in the historical past. An 1861 photograph of children outside an orphanage in New York City, for example, adds immediacy to the accompanying information that the orphanage was looted and set on fire during the Draft Riots of 1863. The first-hand accounts are often heartrending: in an 1868 letter to a Sunday school class in the North, a seven-year-old from Alabama whose mother has died and whose father "went off with the Yankees" writes, "Perhaps I shall get on the cars some time and come to see you. Would you speak to a black boy?" Bolden's overview meanders at times, but it is filled with intriguing, little-known facts, e.g., in March 1955, nine months before Rosa Parks touched off the Montgomery bus boycott by refusing to surrender her bus seat to a white passenger, 15-year-old Claudette Colvin of Birmingham, Ala., was arrested for the same offense. This impressively researched, imaginatively presented history evokes deep appreciation for the struggles, perseverance and triumphs of young black Americans. Ages 9-12.