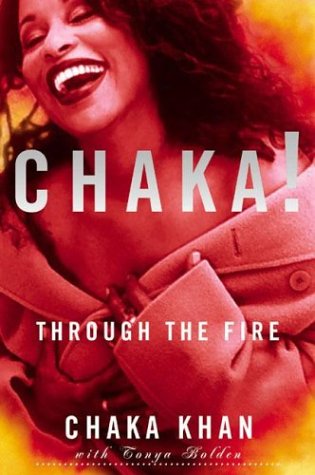 CHAKA! Through the Fire

Young enough to be Aretha Franklin's daughter and old enough to be Lil' Kim's mom, Chaka Khan—with her dynamic 1970s funk, her powerful vocals and her outrageous stage performances—is a link between Franklin's soul music and Kim's hip-hop. To celebrate her 50th birthday, Khan has written a breezy and entertaining autobiography whose structure seems to be modeled on Tina Turner's : a young singer's almost chance selection to front an all-male band, years of bad romantic relationships and a final declaration of creative and personal independence. The trajectory of Khan's highly successful career, as she describes it, is as out of control as her feathers and sequins and the wacky funk that marked her early hits with the band Rufus, such as "Tell Me Something Good." To her credit she lets it all hang out, admitting, "About the only thing I'm certain of is that my life has been a series of 'happenings' that have made me who I am." She candidly details her drinking, drugging, overspending and many marriages and affairs ("Chaka 'United Nations' Khan. That's what some friends called me when it came to me and men"). These details may be of interest only to Khan and Rufus fans, but serious music readers will welcome Khan's first few chapters, which give a remarkably insightful view of the connections between political and music scenes in Khan's hometown, Chicago during the late 1960s and early 1970s.