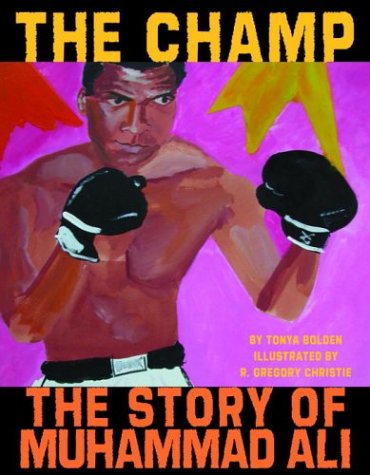 THE CHAMP: The Story of Muhammad Ali

The creators of present an impressionistic tribute to the man born as Cassius Clay. Bolden shapes a poetic if awkwardly paced narrative that includes self-assured quotes by the fighter, often in his famous couplets, and features type of various fonts, colors and sizes. The author first recounts episodes from Cassius Clay's Louisville, Ky., childhood, among them the familiar story of the theft of the 12-year-old's beloved bicycle. When he pledged that he would "whup" the culprit, an officer advised the "string-beany boy" to learn to fight first. Bolden goes on to spotlight the athlete's triumphs in the ring, his conversion to the Nation of Islam, his refusal to participate in the Vietnam War when drafted and the eventual decline of his boxing career. At its best, the narrative emulates the boxer's catchy rhythms and rhymes, but the story's usually spirited cadence stumbles in spots, making for some flat passages ("By 1964, he had won nineteen straight fights. People started watching Cassius Clay a lot"). Yet vibrant writing soon follows: "With his strong, limber, legs, he'd spring around the ring on the balls of his feet or up on his toes," accompanied by Christie's strongest portrait of the legendary fighter, conveying his intelligence, intensity and impressive physique. Unfortunately, on balance, the stylized, vividly hued acrylic-and-colored-pencil illustrations are as uneven as the text. Ages 5-8.