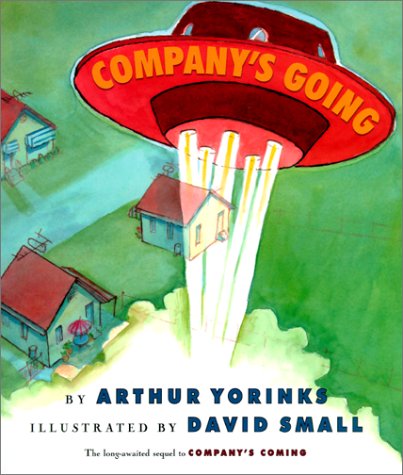 This droll follow-up to opens as Shirley and Moe and their company from outer space bid farewell to other dinner guests: a cache of cousins as well as "all the soldiers, pilots, Marines, FBI men" whom a panicked Moe (convinced that the space creatures were launching an invasion) had summoned in the previous tale. In these unsettled times, readers may find the initial images of tanks and missiles surrounding the hosts' suburban home disturbing, but the visuals then brighten considerably. Sitting side by side on the sofa, the two delightfully silly-looking aliens announce that Shirley's meatballs were the best they have ever tasted and invite her to cater their sister's wedding on their planet, Nextoo. Tickled, Shirley clutches her hands together and, when told that the planet is located next to Uranus, gushes, "Oh, I love Uranus!... Not that we've ever been there, but I hear it's very nice." Such laugh-out-loud lines punctuate Yorinks's playful narrative, which follows Shirley and Moe (who load 27 suitcases onto the spaceship) to Nextoo. Here, in a clever turnabout, the spacemen's Uncle Irving stuns the humans with his ray gun since he suspects of being invaders. Recovering in time to prepare the wedding feast, the couple serve up enough meatballs "to feed the whole planet" and dance the night away before returning home. This comical collaboration makes very good company. Ages 5-9.