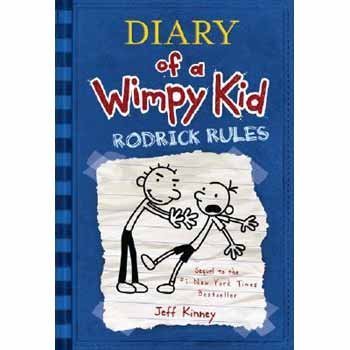 Kinney’s junior-high diarist returns to chronicle another year’s worth of comic moments in this riotous sequel. Once again, school-related drama constitutes a good portion of Greg’s subject matter, from an ongoing correspondence with a pen pal (“I’m pretty sure 'aquaintance’ doesn’t have a 'c’ in it. You really need to work on your English,” Greg replies to the French student’s polite introduction) to mastering book reports by writing “exactly what the teacher wants to hear” (“There were a bunch of hard words in this book, but I looked them up in the dictionary so now I know what they mean”). As in the previous book, cartoons form part of the narrative, corroborating (or disproving) Greg’s statements. He claims that kids with last names at the start of the alphabet are smartest, and a side-by-side comparison of prim über-nerd Alex Aruda and gap-toothed Christopher Ziegel drives the point home. Additionally, Kinney fleshes out the often testy relationships between Greg and his slacker older sibling, Rodrick, and his little brother, Manny (when Greg gets mad at Manny for shoving a cookie in his video game system, the toddler protests, “I’m ownwy thwee!” and offers a ball of tinfoil with toothpicks shoved through to apologize). The hilarious interplay between text and cartoons and the keen familial observations that set apart are just as evident in this outing, and are just as likely to keep readers in stitches. Ages 8-up.