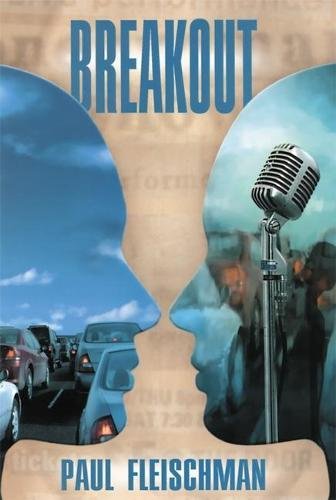 Fleischman (; ) explores the way art allows people to re-examine their lives, in this chronicle of a young woman who experiences an emotional breakthrough while stranded among strangers on the San Diego Freeway—and its contribution to her work onstage. The novel opens with the narrative of 17-year-old Audelia "Del" Thigpen who, readers learn, has just faked her own drowning in order to escape her latest foster home; en route to Taos she becomes mired in a traffic jam. The narrative then fast-forwards eight years: Del has assumed the identity of Elena Franco, and is being interviewed in Denver as the star of a one-woman show centered on characters trapped in a traffic jam (she describes the piece as "autobiography seen through weird, wavy glass"). The two narratives alternate, with a photo of a traffic tie-up and a photo of a microphone (plus differing type fonts) to indicate which is which. Splicing together related vignettes, as he has done successfully in the past, Fleischman here allows the real and imagined events to blend, supplementing and augmenting each other. This blending is both the novel's strength and its weakness. For instance, one of the most poignant moments occurs while the cars are at a standstill, and Del becomes intrigued with a performance artist who is interviewing various drivers about road rage; he ignores Del while interviewing a "tank-topped twenty-something," and Del's response points to her history of abandonment. But in other ways, because of the episodic presentation, readers learn little about her (e.g., the origins of her interest in films and books) so that when, at the close of her show, she finally relates her epiphany, it feels anticlimactic. Ages 12-up.