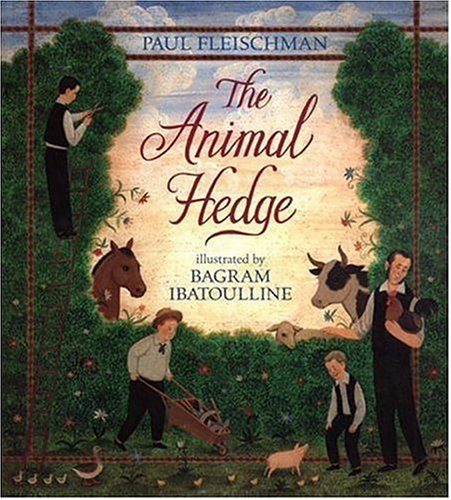 Ibatoulline (; ) once again proves his versatility as he here turns to an American folk art style, with splendid results. Fleischman's () inspiring story, originally published in 1983, follows a father and three sons as they grow conscious of their inner dreams. As the tale opens, Ibatoulline's paintings depict a lush farm filled with contented livestock. His watercolor and gouache illustrations draw on folk-art conventions; flattened figures, moody skies and decorative borders appear to be painted on wooden panels. When a drought forces the family to sell their farm, they move into a cabin and work as tool sharpeners. The father begins to perceive in the surrounding hedge the shapes of the barnyard animals he once cherished ("Part of the hedge seemed to resemble a cow") and trims the hedge to bring them out. Later, when he urges his sons to go "out into the world," and they do not know what vocation to choose, he tells them: "Watch [the hedge] every day... It will send up its answer"—and he's right (Fleischman foreshadows their vocations in the songs they had sung on the farm). "They'd seen in the hedge what lay deep in their hearts and heavy on their minds." Even with Ibatoulline's flattened perspectives, the characters come alive with emotion. The father's eyes crease with contentment as he stands behind the cows and chickens his sons have bought him with their earnings. Ibatoulline's artwork infuses Fleischman's heartwarming story with quiet power. Ages 6-10.