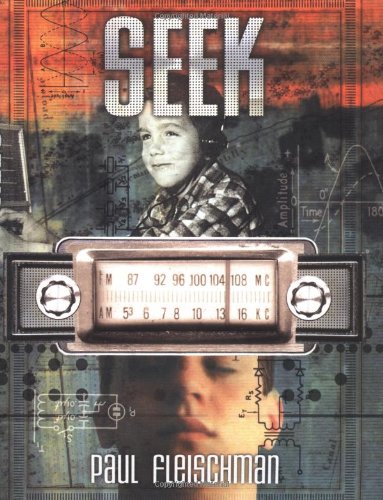 Readers will strongly detect Fleischman's (; ) ear for language and appreciation for family history in this story of a teen's life, which emerges as a lyrical symphony of voices. High-school senior Rob, inspired by his fascination with radios, chooses to write his autobiography (assigned for English class) in the form of a radio play. The narrator presents a series of monologues and dialogues that capture the essence of those who have influenced him most: his trilingual mother, his history-professor grandfather, his storytelling grandmother, the aunts who helped raise him, and his school friends. However, Rob is most conscious of the silence created by his absent father ("Somehow, that missing voice seemed to outweigh all those that were present," he reflects). In an attempt to fill the empty space left by the man he's never met, Rob tunes into radio stations across the country and beyond to listen to announcers, one of whom might just be his DJ father. The novel—which combines elements of poetry, fiction, essay and drama—will be best appreciated in a readers' theater kind of setting; otherwise, it can take some time to get one's bearings, as the narrative moves between flashbacks and contemporaneous conversations. But those who stick with this lively cast of characters, revealed solely through dialogue, will be rewarded. Ages 12-up.