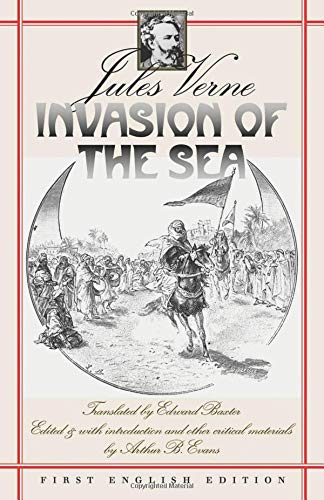 INVASION OF THE SEA

Leading off Wesleyan's Early Classics of Science Fiction series, Verne's 1905 techno-thriller debuts in English, rendered by Baxter with supple decorum and reinforced by editor Arthur B. Evans's thorough scholarly notes, bibliography and Verne mini-biography. Inspired by the rage for canal-building obsessing the world's imperial powers around 1904, this novel draws on an aborted 1874 French proposal for an inland "Sahara Sea," which would have involved digging a 200-kilometer Suez-type canal through Tunisia into eastern Algeria. Verne's self-confessed passion for travel writings and geographical detail illuminate the then-current events that Verne shaped into his fiction, but his deluge of scientific facts engulfs the story's slim teen-oriented literary content. Verne also radically shifts point of view, from the Tuareg tribespeople, who vow holy war against the foreigners because they will lose their lands to the inundation, to a European engineering expedition and its French military escort. Verne sympathetically focuses on the soldiers' heroic canine companion, Ace-of-Hearts, before plunging into an unlikely deus ex machina, producing a disjointed yet predictable narrative with negligible development of character and motivation except for the delightful dog. Students of early SF will appreciate Evans's and Baxter's efforts in bringing Verne's late work to light, but general audiences may find themselves swamped by Verne's quicksand of geographic minutiae.