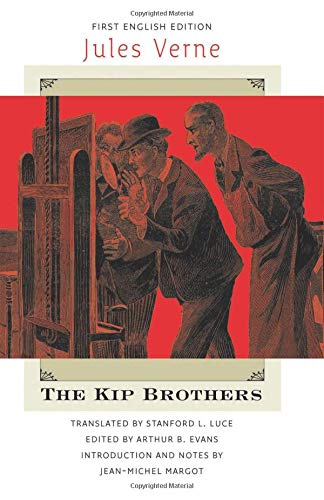 This first English translation of Verne's awkward hybrid of travelogue and coded detective story, originally serialized in 1902, centers on Dutch brothers Karl and Pieter Kip. In the novel's first part, which details nautical journeys around various Australian and New Zealand islands, the English captain Harry Gibson, of the , rescues the shipwrecked Kips. When mutineers Flig Valt and Vin Mod kill the captain, it's Karl and Pieter who are convicted and who spend the novel's second part trying to escape a horrible Australian penal colony. Descriptions of exotic destinations from Verne's own travel books help compensate for the lack of compelling characters. As for the detective story, readers know the murderers' identities, but not how they will be revealed, and the abrupt resolution turns on the manipulation of a photograph. Though readers hoping for an exciting adventure tale won't find it, this will nonetheless delight Verne enthusiasts with its scholarly commentary and original black-and-white illustrations.