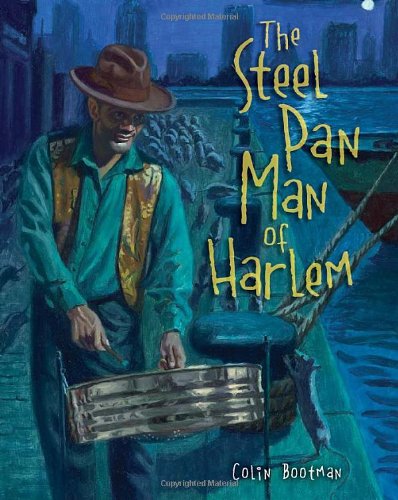 The Steel Pan Man of Harlem

Bootman ( ) triumphs with this gorgeously moody, thoroughly cinematic retelling of the Pied Piper of Hamelin, ingeniously set during the Harlem Renaissance and starring a mysterious musician from the Caribbean (who, it should be noted, has more than a passing resemblance to Laurence Fishburne). The oil paintings conjure up a gritty, workaday world where magic has taken hold: the vermin do cannonballs into bathtubs, and straphangers at the 125½ Street subway platform are suddenly transformed into feverish Lindy Hoppers when the stranger begins to play his steel pan (“He held the sticks in the air, closed his eyes, and began playing the sweetest melody anyone had ever heard”). With text that beautifully embellishes the pictures, and a far happier and more politically relevant ending than the original (after Harlem’s white mayor reneges on his promise to pay the musician for driving out the rats, he’s seen fox-trotting out of town, never to be seen again), this book has all the makings of a spellbinder. Ages 5–9.