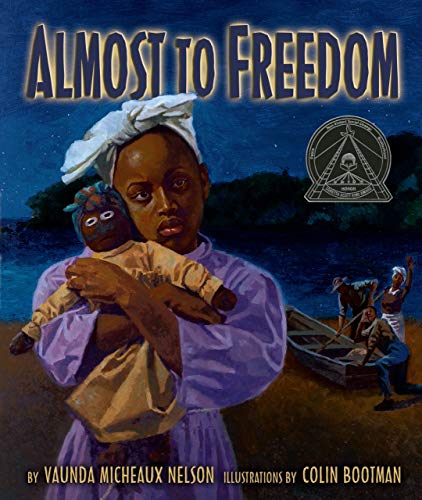 As she explains in an author's note, Nelson ( ) was inspired to write this story by a folk art museum's exhibit of black rag dolls, a few of which were discovered in Underground Railroad hideouts. Narrating this touching tale is a doll named Sally, who begins, "I started out no more'n a bunch of rags on a Virginia plantation." Miz Rachel stitches Sally together for her daughter, Lindy, who hugs the doll and tells her, "We gonna be best friends." Through Sally's perceptive eyes, readers catch a hard-hitting glimpse of slave life: as mother and daughter pick cotton under the gaze of an overseer, Sally hears him holler at them "like he's talkin' to a couple of horses." And after "Massa" whips Lindy when she asks his son how to spell her name, the tearful girl vows to her doll that someday "we be goin' to Freedom." A captivating account of escape via the Underground Railroad includes many suspenseful moments, among them a hasty departure from a safehouse that results in Lindy's inadvertently leaving Sally behind. Readers will be saddened by this turn of events—until another escaping slave child makes the doll her own. Nelson's writing is immediate and often lyrical. Yet it is Bootman's ( ) realistic paintings, distinctive for their skillful use of light and darkness, that best convey the story's pathos and urgency. Ages 6-10.