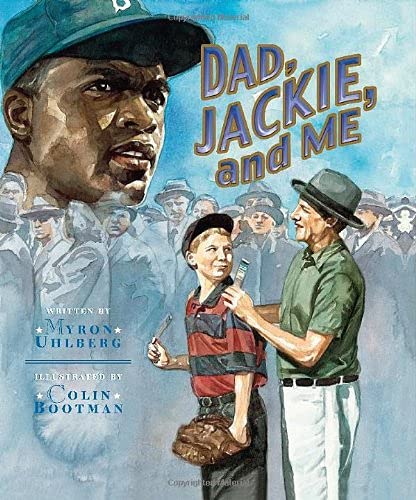 DAD, JACKIE, AND ME

Uhlberg's ( ) moving text and Bootman's ( ) realistic, period watercolors introduce the narrator, an avid young baseball player and fan of the Brooklyn Dodgers. In 1947, the Dodgers have just acquired Jackie Robinson, and the boy's father, who is deaf, comes home with two tickets to see the Dodgers play. Though the man has never shown an interest in the sport, soon after the game, the eager-to-learn man grills his son about the sport and about Robinson, and each night attempts to play catch with the boy. Though Bootman's portraits of father and son can be uneven, his close-ups of Robinson consistently convey the athlete's poise and calm under fire. The tale focuses less on the specifics of the season and more on the link between Robinson and the boy's deaf father overcoming obstacles; in many ways the concluding author's note tells the more poignant side of the autobiographical points to the story. But most readers will be thrilled by the book's climax: when Robinson catches a ball to make the last out of the season, he throws the ball to the boy's father, who, for the first time in his life, catches a baseball. Ultimately, this is an affecting tribute to Robinson, to a dedicated son and to a thoughtful, deep-feeling father. And, of course, to baseball. Ages 4-8.