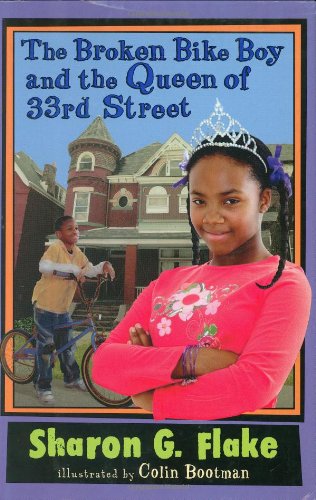 The Broken Bike Boy and the Queen of 33rd Street

bright and brassy fifth grader named Queen narrates Flake's ( ) resonant novel about the importance of friendship, imagination and being true to oneself. Though her father gave her a regal name so that others will respect her, the outspoken girl's superior attitude often alienates her peers, who, she admits, think she is “a royal pain in the neck.” Leroy, a new boy at school who rides a rusted bike without a seat, announces that he is a prince from Senegal. For show-and-tell, the lad, who lives with his mother in a housing project, brings in elephant tusks and gold coins that he says belonged to his great-grandfather. Feeling particularly alone after her only friend moves away, skeptical Queen decides to expose Leroy as a fibber so that her classmates will “stop liking him and like me.” Queen's quest to learn the truth about Leroy's life brings her in contact with Cornelius, a wise, elderly former stage actor who sometimes speaks in intriguing riddles and who eventually reveals the secret behind the boy's stories. Guided by the actions and astute advice of Leroy, Cornelius and her parents, Queen gradually comes to acknowledge and reveal her true self—one who doesn't need to belittle others. Multi-dimensional characters and frequently affecting dialogue make this a memorable work of fiction. Final artwork not seen by . Ages 8-12.