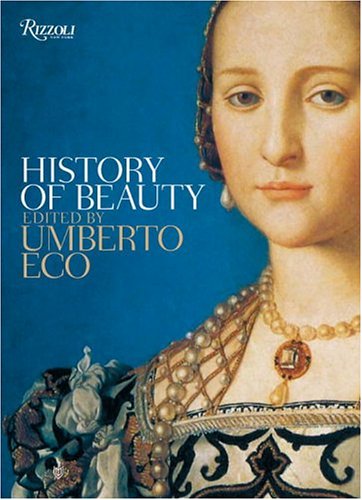 This inspired book begins, after a little throat-clearing, with 11 verso-recto "comparative tables"—sets of contact-sheet–like illustrations that trace representations of "Nude Venus" and "Nude Adonis" (clothed sets follow) as well as Madonna, Jesus, "Kings" and "Queens" over thousands of years, revealing with wonderful brevity the scope of the task Eco has set for the book. What follows is a dense, delectable tour through the history of art as it struggled to cope with beauty's many forms. The text, while rigorous in its inquiries, is heavy on abstractions, which get amplified by stiff translation: "In short, the question was how to retable the debate about the Classical antitheses of thought, in order to reelaborate them within the framework of a dynamic relationship." The selections, however, are breathtaking—300 color illustrations, from Praxiteles to Pollock—and they grant the text the freedom to delve into their complex mysteries. Eco's categories for doing so (e.g., "Poets and Impossible Loves") and his historical breadth in elaborating them are creative and impressive respectively. Long quotations ranging from Plotinus and Petrarch to Xenophon and Zola allow each era to speak for itself, while Eco links them with his own epoch-leaping connections. Seen in terms of a timeless debate on the form and meaning of beauty, masterpieces like Titian's or Cranach's seem, if possible, even more immediate, and related to our own amorous profanities and thefts.