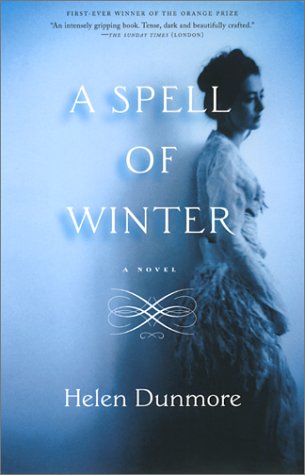 A Spell of Winter

Unsettling love and stifled horror create and then destroy the claustrophobic world of this lush, literary gothic set in turn-of-the-century England. Catherine and Rob Allen, siblings two years apart, grow up in a world of shameful secrets. Their mother creates a public outcry, abandoning her family for a bohemian life on the Continent. Their father, whose mental state always has been slightly precarious, is committed to an asylum in the country. The children are sealed off with their grandfather in a crumbling country estate accompanied by their sturdy and well-loved servant, Kate, and the predatory tutor, Miss Gallagher. In true gothic fashion, terror, violence and eroticism collect beneath every dark surface. Against this strange and secretive backdrop, Cathy and Rob develop a closeness so fierce that it eventually threatens to smother them both. Kate makes the first crack in their hermetically sealed world, which World War I eventually bursts wide open. With Kate's departure for Canada and Rob's for the front, destitute times at home force Cathy into self-reliance. It's only after she's redeemed by hardship that she's given a second chance to be redeemed by love. Though the setting is classic gothic, the novel is peculiarly modern with its precise, unforgiving depictions of childhood and madness, its dark sensuality and surprising, artful use of metaphor. The intensity and darkness of the world Dunmore creates teeters between gripping and overwrought; some may find the story heavy-handed. Still, Dunmore's keen, close writing is deserving of Britain's prestigious Orange Prize, which the novel won when it was first published in the U.K. in 1995, and most will enjoy the book as a finely crafted, if disturbing, literary page-turner. (Feb.) Forecast: Dunmore's stock has been steadily rising with the publication in the U.S. of her last three novels (Your Blue-Eyed Boy; Talking to the Dead; With Your Crooked Heart); demand for this earlier, career-establishing work should be strong.
close
Details