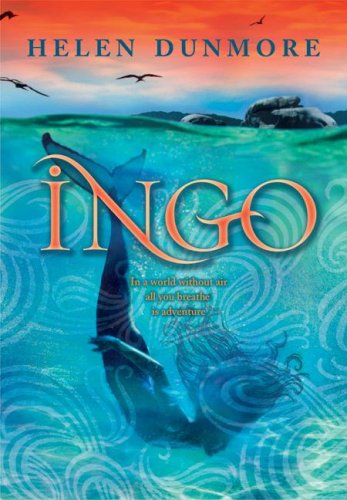 Dunmore's ( , for adults) richly imagined fantasy, her first for young adults, posits tension between two parallel worlds: one undersea, the other along the rocky Cornwall coast. Sapphire, 11, and her older brother, Conor, have grown up in a close-knit family, loving the tidal cove below their cottage. Their father, Mathew, a fisherman and photographer, adores the sea; on the other hand, their mother has, in her words, "good reason to fear" it. When Dad disappears, and part of his boat is found, the family holds a memorial service and moves painfully through grief. Even a year after his disappearance, Sapphy and Conor refuse to believe their father is dead, while their mother begins to move on, befriending a visiting diver. Mer children Faro and Elvira begin to court the siblings, introducing them to such marvels as breathing underwater and swimming with dolphins. Ingo, the undersea world about which their father sang, beckons overpoweringly, and Sapphy, who is drawn back there repeatedly, begins to understand the Mer language. A wise beekeeper, whom some suspect is a witch, seems to know Mathew's fate. She subtly intercedes as Sapphy vacillates, "cleft" between her Mer and Air identities, and also suggests that Ingo is "breaking its bounds," intruding into the Air world. Dunmore makes both settings riveting, and captures Sapphy's lonely struggle through the heroine's first-person narrative. Dualities—skepticism and belief, collective memory and individual perception, the pull of Mer life versus Sapphy's family love—persist to the tale's end and beyond. Ages 10-up.