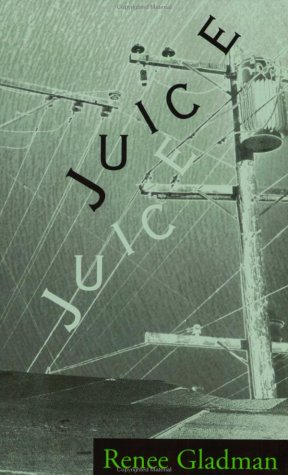 "About the body I know very little, though I am steadily trying to improve myself, in the way animals improve themselves by licking," begins Gladman's agreeably personal and expansively philosophical first collection of four fictional prose poems. Like the recent debut from fellow San Franciscan Pamela Lu (), Gladman describes the strange dilemmas of selfhood when basic assumptions about who we are and why we do what we do have collapsed under various pressures, linguistic and otherwise. The opening 12-page "Translation" adopts various sociological poses to describe a people who "migrated off the 'declining' coast" intent on discovering, via archeology and some odd logistical gestures, the secrets of its occluded past. In "Proportion Surviving," the "juice" of the book's title gets a delightful metaphorical ("I was happy. I mean, I was in my juice") and recollective workout—from a Proustian glass of apple juice, to stalking the bottled aisle of the grocery store, to a love "crisis" that finally gets the speaker off it, seemingly for good. In "No Through Street," the narrator's sister wins fame for painting a series of functional but nonstandard street signs, setting off a series of oblique meditations on race, intimate relationships ("if this woman is the directionalist whom everyone knows about, who is my sister?") and cultural capital. In the most fragmented but most evocative piece, "First Sleep," the search for a "Mrs. Gladman" is carried out amidst a series of "sleeps," as if identity itself can be discerned only in the synthetic, but punctuated, moments of the subconscious. Though one wishes at times for a more vividly descriptive language or more concentrated elaboration of the ideas, this is a rich and unusual collection, like an alien codex from a culture in one's own backyard. Selected Poems of Solomon Ibn Gabriol