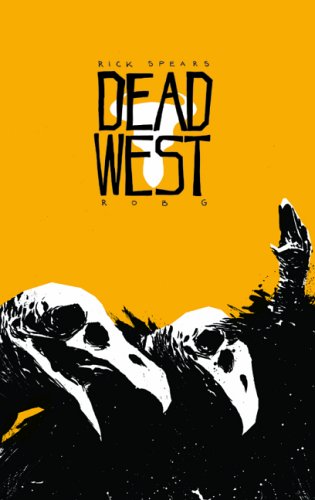 This story starts, as all stories about the American West do, with the white man murdering the American Indian for his land. In this case there is one survivor, the son of a chief who lives only to seek revenge. Years later, a town has sprung up on the site of the massacre. A sheriff who shows no mercy, a fugitive, a pregnant whore and a bounty hunter all converge here, where civilization is losing its hold. The orphaned American Indian returns to cast an ancient curse. Next thing we know, the dead are rising from their graves and it's every man—and woman—for himself as the townsfolk face the zombie horror. This story has all the conventions of the Western, from the bounty hunter to the showdown, but the walking undead make every cliché unpredictable. Spears and Rob G almost pull off this horror/western hybrid. However, the scratchy pen-and-ink drawings that make the zombies so gruesome also make it difficult to distinguish the myriad main characters from one another, and the disparate story lines flash by without much development. Despite the weaknesses, the story's novelty carries the day.