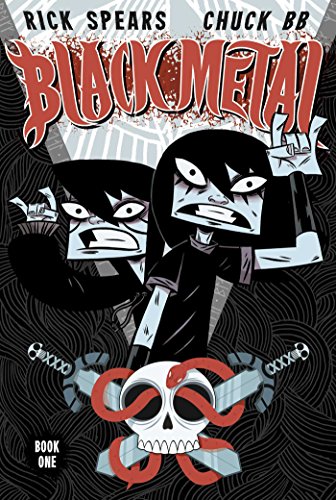 Heavy metal is a rock 'n' roll genre known for guitar-worship, bombast and pomposity that serve to fuel young men's fantasies of heroism and machismo, sometimes with elder gods, their amoral mythologies and their inevitable return thrown in. In other words, it's a subject ripe for lampooning, and this graphic novel is one of the funniest takes on the clichés of the genre since . Upon playing a Frost Axe album backwards, black-clad metalhead twins Shawn and Sam discover their true arcane heritage, obtain the mythic Sword of Atoll and embark on a mission to conquer Hell itself. Demons, dark lords, Norse deities, a black metal band that really practices what they preach, armies of the damned and even Satan himself all turn up and provide fodder for hilarity that wouldn't stand a chance in Hell of being endorsed by the Church. Hilariously illustrated cartoon mayhem of the most entertaining order, this amusing tale ends much too soon, leaving the reader foaming at the mouth, hands upright and flashing “the horns,” anxiously awaiting more devilry and guitar solos