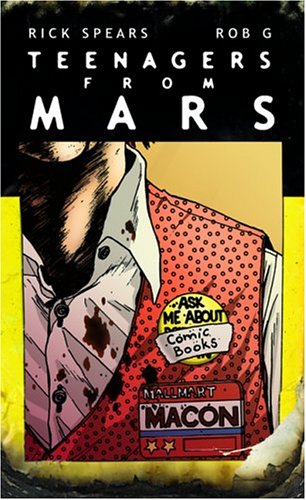 Mars is a typical small Southern town where bored, constrained teens kill time vandalizing things and robbing graves. These acts are delivered with the fearless bravado of people who think they have nothing to live for, but Spears shows the redeeming power of art and true love. The story's hero, Macon, is a comic artist who's just been fired from Mallmart for sassing his manager. He meets his punk dream girl, Madison, in the most un-cute way possible: she needs to use the bathroom while he's throwing up during a party. Drawn to each other's outsider status and anarchic tendencies, they find love while standing up to the mayor, who has shut down the local comic store, confiscated Macon's art and encouraged book burnings. Spears captures the frustrations and dreams of daily life while artist Rob G. beautifully realizes the variety of scenes that include such fresh set pieces as a party where everyone is made up like a zombie. The moody, cinematic art is manga-like in its simplicity and flow. The creators have an amazing ability to bring a sense of imagination to the mundane (in one example, G. enlivens a scene of characters watching a movie, interweaving the screen images, film dialogue and audience interjections). This is a coming-of-age love story bursting with memorable characters and scenes.