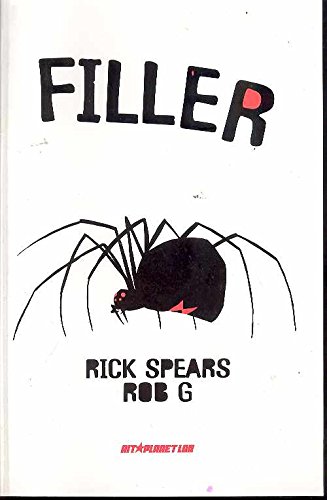 A game attempt by the creators of to out–Sin City , this work traces the misfortunes of a lowlife so anonymous that his name is John Dough, who makes his living as "filler" in police lineups. Dough gets involved with Debra Cross, a hooker with a heart of darkness and a black eye; Cross and his attempt to rescue her from her vicious pimp gets him beaten to a pulp and framed for murder. But Dough and a writer friend fight back, by way of a couple of rather unusual metafictional twists. This book's look is as noir as they come and clearly inspired by Frank Miller—it features thick, oozing blotches of black and shocking patches of red, straight lines arrayed into menacing sets of bars everywhere, and an entire cast of lowlifes with chiaroscuro-heavy faces who look like they've actually seen better days, and never will. The moodiness of Rob G.'s artwork makes up for some of his drawings' dubious anatomy, and the story's Grand Guignol torrents of misery and gore eventually become kind of funny. The strength of the book isn't in its bluntly obvious symbolism or over-the-top grimness, though: it's Spears and Rob G.'s smooth, deliberate storytelling.