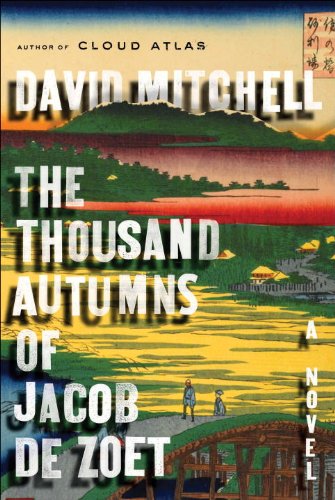 Mitchell’s rightly been hailed as a virtuoso genius for his genre-bending, fiercely intelligent novels and . Now he takes something of a busman’s holiday with this majestic historical romance set in turn-of-the-19th-century Japan, where young, naïve Jacob de Zoet arrives on the small manmade island of Dejima in Nagasaki Harbor as part of a contingent of Dutch East Indies officials charged with cleaning up the trading station’s entrenched culture of corruption. Though engaged to be married in the Netherlands, he quickly falls in hopeless love with Orito Aibagawa, a Dutch-trained Japanese midwife and promising student of Marinus, the station’s resident physician. Their “courtship” is strained, as foreigners are prohibited from setting foot on the Japanese mainland, and the only relationships permitted between Japanese women and foreign men on Dejima are of the paid variety. Jacob has larger trouble, though; when he refuses to sign off on a bogus shipping manifest, his stint on Dejima is extended and he’s demoted, stuck in the service of a vengeful fellow clerk. Meanwhile, Orito’s father dies deeply in debt, and her stepmother sells her into service at a mountaintop shrine where her midwife skills are in high demand, she soon learns, because of the extraordinarily sinister rituals going on in the secretive shrine. This is where the slow-to-start plot kicks in, and Mitchell pours on the heat with a rescue attempt by Orito’s first love, Uzaemon, who happens to be Jacob’s translator and confidant. Mitchell’s ventriloquism is as sharp as ever; he conjures men of Eastern and Western science as convincingly as he does the unscrubbed sailor rabble. Though there are more than a few spots of embarrassingly bad writing (“ thinks Uzaemon, ”), Mitchell’s talent still shines through, particularly in the novel’s riveting final act, a pressure-cooker of tension, character work, and gorgeous set pieces. It’s certainly no , but it is a dense and satisfying historical with literary brawn and stylistic panache. ( )